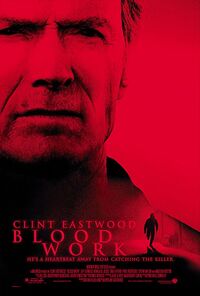 Blood Work is a film adaptation of Michael Connelly's seventh novel, scripted by Brian Helgeland and released on 9 August 2002.

While Harry Bosch was investigating the murder of Howard Elias, he saw a bus stop with an advertisement for this movie, neatly connecting reality with fiction.

Retrieved from "https://harrybosch.fandom.com/wiki/Blood_Work_(film)?oldid=9409"
Community content is available under CC-BY-SA unless otherwise noted.