NOTE: The question of Irving's race has caused a lot of confusion on this Wiki. In the books, beginning with the first one, Irving is clearly described as white. However, the Amazon series cast Lance Reddick as Irving. Many people who have not read all the books assume that the Irving character has always been an African-American man. Reddick inhabits the role of Irving so completely that it is now hard to imagine Irving as anyone else. This is just one of many differences between the books and the series. Since this Wiki primarily addresses the books, we describe Irving here as white. References to the series are included in the Portrayal section for each character.

Irvin S. Irving is the husband of Connie Irving, the father of George Irving. He is a Los Angeles city councilman, and a former Deputy Chief and Assistant Chief with the Los Angeles Police Department. He joined the LAPD in 1955, and considers himself to be "a slow-moving, careful policeman" who does "not like shortcuts" and refuses to be spoken to with abbreviations (detesting, for instance, the use of the shorthand "FBI" in place of the Federal Bureau of Investigation).

He is a white man, physically distinctive with a shaved head and protruding jaw muscles that he intentionally clenches and flexes to intimidate others. This is hard on his teeth, necessitating new molar implants every 18 months. His ambitious, aggressive personality matches his intimidating appearance, and he does everything he can to promote the image of himself as a junkyard dog. All of this may be, in part, to overcome his somewhat silly name.

As a patrolman, Irving's serial number was #1906. In late October of 1961, Irving found the body of a prostitute apparently strangled in an alleyway off of Hollywood Boulevard. ~During the 1970's and early 1980's he rose through the ranks of the LAPD due to his combination of ambition, political acumen, and intimidating appearance.

In the late 1980's he was in charge of the Public Disorder Unit (PDU). The unit had a reputation for gathering a lot of data and intel but not closing many cases. One gang they broke up was the Chatsworth Eights. Irving also used the unit to manipulate cases to meet his personal and political ends. When Rebecca Verloren was murdered in 1988, Irving and another PDU detective visited her father and warned him to stop talking about the racial aspect of the case. He also delivered the same message to Ron Green. His stated motive for this coverup was to prevent more racial unrest, but his hidden agenda was to protect the son of the Captain of the Internal Affairs Division, who was the head of the Chatsworth Eights. This move gave Irving absolute control over Internal Affairs, which he would later command. In addition, Irving did not want the Verloren investigation to conclude that the murderer was one of the gang members his unit had just busted. It would cast doubt on the effectiveness of the PDU. So he led the investigation astray and Verloren's murder was not cleared until 17 years later. When Irving was promoted to Deputy Chief, one of his first actions was to disband the PDU.

In 1989, as Deputy Chief in charge of Internal Affairs, he was involved in disciplining Harry Bosch for his actions in the Dollmaker case, resulting in Bosch being suspended and then reassigned from RHD to the Hollywood Division. He wanted to fire Bosch but for reasons that are not specified he was unable to do that. In May of 1990, he assigned IAD detectives Pierce Lewis and Don Clarke to investigate Bosch again in connection with the murder of Billy Meadows and the break-in at WestLand National Bank. At the conclusion of that case, Irving decided to keep Bosch at Hollywood under the supervision of Lt. Harvey Pounds.

By December of 1991, he had been promoted to the position of Assistant Chief, and assigned the investigation into the Christmas night death of Narcotics detective Calexico Moore to RHD detective Frankie Sheehan and IAD detective John Chastain, a case that Bosch believed should have been given to him. He gave Bosch the "dirty work" of notifying Moore's next-of-kin, his estranged wife, Sylvia Moore. However, Bosch continued to investigate the case in a freelance manner. On December 29th, Irving attended Moore's funeral and spoke with Bosch about what the detective had uncovered during a trip to Calexico and Mexicali.

In November of 1993, he testified in the wrongful death lawsuit brought by Deborah Church against detective Bosch for the death of her husband, the same case in which Irving had disciplined Bosch. Until this time, Irving was unaware that the murdered prostitute he found in 1961 was Marjorie Lowe. When a new body was discovered matching the m.o. of the Dollmaker, Irving convened a new task force to find the The Follower. At this time he revealed to Bosch that he was, in fact, the RO (Responding Officer) that had found the body of Bosch's mother when he was a beat cop in 1961. Irving also expressed his support for Bosch in the trial.

In 1995 Irving investigated whether Bosch killed Harvey Pounds, since they were known to have frequent disputes. He concluded that Bosch's alibi was valid. Irving's relationship with Bosch is described at this time as having evolved from mutual mistrust to wary mutual respect. It did not stay this way for long.

In September of 1996, Irving arranged a meeting between Bosch and federal agents when an undercover agent accused Bosch of planting evidence to frame him for the murder of Anthony Aliso. Later that month, Irving disciplined Bosch (as well as his partners Jerry Edgar and Kizmin Rider) for conducting an unauthorized investigation and for failure to properly search and secure a suspect.

In April of 1999, Irving called Bosch to specially assign his team to the investigation into the murders of housekeeper Catalina Perez and civil rights attorney Howard Elias. Irving wanted the case handled with great sensitivity in order to prevent public unrest. It didn't work out as he planned, largely because Bosch found evidence in the lawyer's files regarding the murder of Stacey Kincaid. Irving then focused on Frankie Sheehan due to the detective's threats against Elias several years previously. When a ballistics test appeared to show that Frank Sheehan was the killer of Elias, Irving decided that Sheehan was guilty, despite evidence uncovered by Bosch indicating the John Chastain was the actual killer of both Elias and Sheehan. He also covered up the evidence that Stacey Kincaid had actually been killed by her step-father, thus exonerating Michael Harris. In the end, Irving's efforts at cover-up were unsuccessful and L.A. erupted in rioting again.

In January of 2001, he interrogated private investigator Rudy Tafero along with District Attorney Alice Short, Sheriff's detective Jaye Winston, and FBI agent Don Twilley regarding the murder of Edward Gunn and the attempted murder of former FBI profiler Terry McCaleb.

In January of 2002 he was involved in the investigation of the murder of Arthur Delacroix. Irving's involvement was primarily directed toward avoiding embarrassment to the department. When Julia Brasher was killed by a self-inflicted gunshot, Irving calls Bosch a "shit magnet" and suggests that he think about retirement. He quickly changed his mind and directed Bosch to be transferred to downtown RHD where he could keep a closer eye on him. Bosch decided to retire instead.

When William J. Bratton was named the new Chief of Police, Irving was moved to the Office of Strategic Planning in the City Hall Annex. It was a move that robbed Irving of much (but not all) of his power. When Bosch returned from retirement in 2005, Irving visited Parker Center to deliver a veiled threat to the detective regarding the Verloren case. When Roland Mackey was killed, Irving and Bosch made a deal to not publicly criticize each other. However, other people were aware of Irving's past manipulations. At the Academy graduation which occurred shortly after closing the Verloren case, Chief Bratton announced Irving's retirement, much to Irving's surprise.

A year later, Irving decided to run for L.A. City Council against incumbent Martin Maizel. Irving won the race and used his new power to punish the police department. He voted against every pay raise and request for added staffing for the department. He also used his power to enhance the lobbying business of his son, George. However, this made him vulnerable to manipulation. When he received a supposed citizen's complaint about a taxi cab driver, he asked Bobby Mason to look into it. Harry Bosch uncovered this connection and used it against Irving.

He served three terms on the City Council and was running for a fourth. On 3 October 2011, Irving used his political power to have Bosch assigned to investigate the death of his son who had fallen seven stories from room #79 of the Chateau Marmont Hotel. Although Irving had a vendetta against the department and a rocky relationship with Bosch, he knew that he could trust Bosch to pursue the truth. Still, he tried to micromanage Bosch and the investigation, but Bosch wouldn't let him. When Bosch confirmed that his son's death was suicide Irving was outraged, in part because of Bosch's failure to communicate with him. In a showdown meeting with the Chief, Irving demanded that some action be taken against Bosch. Instead, the Chief showed his support for Bosch. Irving's hold over the LAPD was broken.

After the meeting Irving tried to convince Bosch that he had been set up by someone in the Chief's office. Bosch soon realized that Irving was right. Irving subsequently lost his bid for reelection to the City Council, in large part due to the scandal surrounding the taxi cab issue. He was replaced by a supporter of the department. 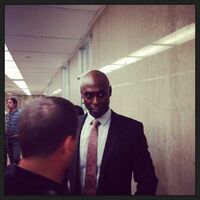 Irving is played by Lance Reddick in the streaming series Bosch.

Retrieved from "https://harrybosch.fandom.com/wiki/Irvin_Irving?oldid=11818"
Community content is available under CC-BY-SA unless otherwise noted.