Start a Wiki
Jerry "Jed" Edgar (AKA J. Edgar) was a homicide detective with the Hollywood division of the LAPD, and an occasional partner of Harry Bosch. He is the father of a son born in 1988, and the cousin of Jason Edgar. He is African-American, 6 ft. 4 in. in height and muscular. Unlike Bosch, Edgar is a sharp dresser, favoring suits from Nordstrom and expensive European shoes. He almost always wears a suit to crime scenes and is very careful to not get dirty. He can be highly judgmental or sarcastic when questioning witnesses or suspects, criticizing their actions in a way that can be counterproductive to eliciting information.

In 1988 when Jed was a novice homicide detective, he was stationed at the Devonshire Division. He worked for a time with Arturo Garcia and Ron Green, but he was not involved in the investigation of the death of Rebecca Verloren.

In the case of the murder of Billy Meadows, Edgar is largely left out because Bosch is teamed with FBI Special Agent Eleanor Wish. Edgar's primary concern is that Bosch's conflicts with the department do not rub off on him.

During the riots of 1992, Jerry and Bosch were assigned to a patrol car with Officers Robleto and Delwyn, working murders in the field. At the time, they investigated the shooting death of photographer Anneke Jesperson.

In 1993 he and Bosch are only occasional partners because the department has decided that the detectives could work alone except in high-profile cases. He is only tangentially involved in the Calexico Moore case.

During the Concrete Blonde case, Edgar works with Bosch briefly on the discovery of an apparent 12th victim of the Dollmaker. However, Assistant Chief Irvin Irving reassigns the case to Francis Sheehan and Mike Opelt in RHD. Irving later changes his mind and includes Edgar on the Follower task force. During the wrongful death lawsuit filed by Deborah Moore against the LAPD, Edgar leaks information to Moore's attorney, Honey Chandler. When Bosch finds out by accident, he says he will not report this to IAD but he will not work with Edgar again. Bosch later changes his mind and works with Edgar again.

He also supplemented his police income by working at Valley Pride Properties, a Hollywood realtor, until 1993. While working on real estate, he sometimes shows a hesitance to respond to call-outs or to put in overtime if needed to solve a case. Bosch is somewhat disdainful of what he sees as Edgar's lack of commitment to the mission. In September of that year, he and Bosch investigated the disappearance of Marie Gesto.

In April of 1994, he was reassigned to work with Detective Burns while Bosch was put on involuntary stress leave for attacking his and Edgar's supervisor, Lt. Harvey Pounds.

In early 1996 Edgar and his wife divorced. In September of 1996, he, Bosch, and Kizmin Rider investigated the murder of Anthony Aliso. Edgar did a lot of the paper work for the case, maintaining the murder book and preparing search warrants. Edgar was disciplined by the department, along with Bosch, for failure to utilize proper procedure in handling a suspect and allowing him to escape. However, Edgar's assistance to Bosch in the freelance investigation of the Aliso murder was instrumental in capturing the killers, Ray Powers and Veronica Aliso.

In April of 1998, he was called in by Bosch to investigate the murder of a lawyer at the base of Angels Flight.

In October of 2000, he, Bosch and Rider investigated the death of Jody Krementz, and later arrested director David Storey for the actress's murder. In January of 2001, Edgar testified at Storey's trial.

On 2 January 2002, he and Bosch led the excavation of a shallow grave in Laurel Canyon. This led to their investigation of the murder of Arthur Delacroix by Johnny Stokes. At that time Edgar was living in the vicinity of Van Nuys and driving a Lexus. At the conclusion of that case when Bosch is ordered to transfer to RHD, Edgar is quite upset that the opportunity was not given to him.

In May of 2005, he received a call from Bosch, who had been hired into the Open-Unsolved Unit of the Robbery-Homicide Division after a two-year retirement, regarding the 1988 activities of the Chatsworth Eights.

In September of 2006, he received a call from Bosch again regarding the Gesto investigation after serial killer Raynard Waits attempted to confess to the killing. By 2007 he was lead detective of a three-person homicide team in Hollywood Division. His team got the initial callout on the Stanley Kent murder before it was taken over by RHD.

In 2012, he submitted the file on the murder of Raymond Randolph to the Data Evaluation and Theory Unit for analysis. Shortly afterwards he retired from the LAPD and moved to Las Vegas where he remarried. After two years he returned to L.A. and was hired by the State as an investigator in the Health Quality Investigation Unit. In 2017 he received a complaint submitted by Jose Esquivel, Jr. regarding a clinic that he believed was prescribing excessive amounts of opioids. Esquivel was murdered in 2018 before Edgar had the opportunity to work on the case. Harry Bosch and Bella Lourdes met with Edgar to explore the possibility of a connection between Esquivel's complaint and his murder. Edgar mentioned he had a connection with a DEA agent named Hovan who might be able to help. He also asked to be brought into the case because he was bored with his job. 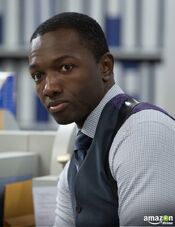 Edgar was played by Gar Anthony Haywood in the 2006 video adaptation, The High Tower.

Edgar was later played by Jamie Hector in the 2015 streaming series Bosch.

Retrieved from "https://harrybosch.fandom.com/wiki/Jerry_Edgar?oldid=11685"
Community content is available under CC-BY-SA unless otherwise noted.