Julia Brasher (b. 1967; d. Jan 2002) was the daughter of Frederick Brasher, a "boot" (rookie cop) with the Los Angeles Police Department, and a native of Bel Air. She was born at Cedars - Sinai Hospital. She had brown eyes and brown hair, generally worn in a tight braid while she was working. She had a tattoo of a rising sun on her back.

A week later, Brasher and her partner were backing up Bosch and Jerry Edgar who wanted to interview Johnny Stokes in connection with the murder of Arthur Delacroix. Stokes ran and Brasher pursued him into the underground parking area of the La Brea Park Apartments. Brasher accidentally shot herself when she reached for her cuffs with her service weapon. 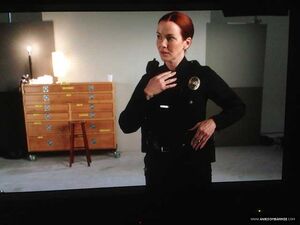