Madeline "Maddie" Bosch is the daughter of former FBI agent Eleanor Wish and LAPD detective Harry Bosch, the niece of criminal defense attorney Mickey Haller, the cousin of Hayley Haller, and the granddaughter of attorney J. Michael Haller and Marjorie Lowe. She also the niece of three unnamed aunts, and another unnamed uncle. It is noteworthy that her mother gave her the surname Bosch, acknowledging Harry's parentage. However, Eleanor did not tell Harry about his daughter for several years.

There are numerous clues regarding her birth date, and they are not always consistent. In Angels Flight (1999) it appears that Maddie is not born yet and Eleanor is only just preparing to leave for Las Vegas. In Lost Light (2002) Bosch meets Maddie for the first time and she is almost four years old. In The Narrows Harry says she is five years old as of 2004. In The Closers (2005) he says she is almost 6. All of these suggest that she was born some time in 1999. However, in The Black Box (2012) Harry indicates that she has a driver's license, meaning that she could not have been born any later than 1996. This is repeated in The Crossing when Bosch says she was 13 years old when she came to live with him in 2009.

Maddie first met her father in October of 2002, when he traveled to Las Vegas while he was working on the Angella Benton case. She was almost four years old at the time. Over the next year Bosch came back to Las Vegas frequently to see Maddie, and she understood that he was her father. Because her mother supported them by gambling, Maddie had a live-in caretaker.

She moved with her mother to Happy Valley in Hong Kong in 2003. She attended the exclusive Happy Valley Academy. Bosch visited her several times in Hong Kong and on one occasion took her to the new Disneyland in China. She also visited her father in Los Angeles, most recently in July 2009. As she approached adolescence she began having more conflicts with her mother, and she expressed the desire to move to L.A. and live with Harry. She also began hanging around with Chinese friends including He Quingcai and her brother Peng whom she called "Quick." Maddie was really friends with He, but Peng often hung out with them. There were some things about Peng that may have attracted Maddie. He was older (about 17), he smoked, had tattoos and owned a car. Maddie, Peng and He hatched an ill-advised plan to fake her abduction so that her father would come to rescue her and take her with him to the U.S. They made a short video depicting her bound and gagged, which she sent to her father. The plan backfired with tragic consequences.

Harry and Eleanor immediately went to Hong Kong to search for her. In the process Eleanor was killed.

In addition, Peng decided to make the abduction real. On 11 September 2009, he delivered her to Dennis Ho, a human trafficker. It is possible that Ho was planning to sell her for her organs. Peng probably told Ho about the video, so he was prepared for Bosch to come looking. Ho planned to take her to a boat at Northstar Seafood and Shipping on September 13th, and she was probably going to be taken to a place where Bosch could not find her. Fortunately she was rescued from the trunk of Ho's car by Bosch and Sun Yee. They immediately went to the airport and boarded a flight to Los Angeles. By then she had figured out that her mother was dead.

In L.A. with her father, she began the process of grieving for her mother and adjusting to life in the U.S. after six years in Hong Kong. She started attending a middle school down the hill from their home. She admitted to her father that she had concocted the abduction hoax, and she felt terrible guilt for having caused her mother's death. Although the series of events was extremely traumatic, she recovered remarkably quickly and easily. She had been seeing Dr. Hinojos weekly since her mother was killed, and she appeared to be benefiting from it.

At the beginning of 2010 she occasionally had the school's vice-principal as a babysitter which did not sit well with her. She would have preferred to stay home alone or stay with her friend Aurora "Rory" Smith. Later she met her cousin, Hayley Haller, and they became friends. During the Jason Jessup case she overheard her father talking on the phone, and she asked him questions about the case. Bosch answered her questions in order to have a conversation with his daughter, but he wondered if he was telling her too much. Because her father's computer skills are poor, she showed him how to get a map of Franklin Canyon. This exposure to police work must have had an effect because that summer she told her father that she eventually wanted to join the Department and become a detective. She began taking shooting lessons at a firing range in Newhall, training with a Glock pistol and becoming "proficient in weapon safety and marksmanship."

On Monday, 3 October 2011, she stayed home sick from school, and was visited by her friend Ashlyn. That evening, she helped her father play a DVD from the surveillance camera at the Chateau Marmont Hotel that showed George Irving checking in the previous evening. On Saturday, October 8th, she and her father traveled to Catalina so that Maddie could compete in a marksmanship contest. She won the first round of the single-elimination competition, but lost in the second round.

While her father worked on the Irving and Lily Price cases he was away from home most of the time, and Maddie was largely on her own. Harry felt guilty about this, but in fact it was probably liberating for her. She appears to have gained independence and self-confidence from being left alone. She clearly preferred it to being babysat by her school's vice principal when she was younger. When she interacts with her father she exhibits increasingly mature attitudes, including a lot of insight about how Harry is feeling.

For her dad's birthday in 2012 she cooked a great dinner, but it was marred by something Harry did. It was later revealed that she wanted to join the LAPD, a decision which her father lightly supported. He secretly wished she would change her mind but helped her train regardless. Harry took her to the Police Academy where his friend, Bill Holodnak, set up a session on the Force Options Simulator, a state-of-the-art training device for shoot/don't shoot scenarios. She did very well overall, but when faced with an airplane hijacking scenario, she accidentally "killed" a flight attendant who was taken hostage. She felt very badly about her mistake. Harry then tried to console her by telling her that the gun was probably not zeroed-in, which only made her feel worse.

She became adept at cooking, although she stopped eating red meat, and developed a taste for jazz like her father. She is not a typical teenager; she doesn't date much and says she will never wear makeup. In 2014, she joined the Police Explorers Program and participated in their Wednesday night activities at the Hollywood Station where her father used to work. She occasionally went out with Jonathon Pace and others from the Explorers group. She volunteered with Meals-on-Wheels and was considering attending Cal State L.A. after high school. Her interest in competitive shooting waned somewhat but she still went shooting with her father sometimes.

By 2015 she was a senior in high school and driving a powder blue VW beetle. She had decided to go to Chapman University where Hayley would also be going, and they have decided to be roommates. Maddie got a couple of scholarships, but the tuition was still pretty steep. She was somewhat moody at times (typical for a teenager) and acted upset when she learned that her father was working on a defense case, even though it was for her uncle Mickey. At this time she is thinking that she would like to be a profiler. Harry got her some case files to look at but she wasn't very interested. However, she responded more positively when it became clear that her dad and uncle were defending an innocent man. She went with her dad to the hearing at which the charges against Da'Quan Foster were dismissed.

By October 2016 she was 19 years of age, starting her sophomore year at Chapman and majoring in Psychology. She and Hayley had not stayed close, and Maddie lived off campus in a house on Palm Avenue in Orange with three other young women, all Psych majors. With her classes and social life, it is more difficult for her to get together with her dad. There is no indication of a love life at this time.

By 2019 she is ready to graduate and once again considering her career options. She told Harry that she is interested in law school but concerned about the cost. He assured her that the cost would not be a problem. When Harry was briefly abducted by members of a San Fernando street gang, Maddie expressed her wish that her father would refrain from risky quasi-police activities. He told her about his diagnosis of leukemia, giving her two reasons to worry about losing him. It was later revealed in The Law of Innocence that she has decided to follow in her father's footsteps into becoming a Police Detective, by joining the Police Academy. Meanwhile, she had received a visit from her cousin Hayley, while her father Harry is helping her uncle Mickey during his trial for murdering Sam Scales. She later joined her family at her uncle's trial.

In 2021, Bosch mentions to Renée Ballard that Maddie is doing well at the academy and has a boyfriend.

Michael Connelly said in an 11 March 2013 Q&A that, "Harry's in his early 60s now, and pretty soon he's going to have to retire, and so his daughter is getting increasingly bigger part in these stories. At some point things will shift and she will become the main focus of my writing." However, as of 2021 that hasn't happened yet. Maddie is only now at an age where she could begin making serious career choices. 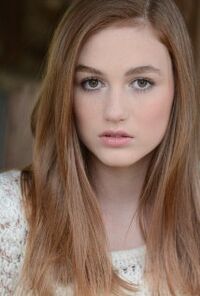 Madeline is played by Madison Lintz in the 2014 streaming series Bosch.

On May 6, 2022, Lintz will reprise the role of Madeline Bosch, who is now a rookie cop in the Amazon Freevee spin-off "Bosch: Legacy" (recently rebranded from IMDb TV).