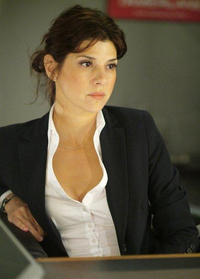 Margaret "Maggie McFierce" McPherson is the first ex-wife of defense attorney Mickey Haller, the mother of Hayley Haller, and a prosecutor with the Los Angeles County District Attorney's Office in Van Nuys. She and Hayley live in a two-bedroom condo on Dickens Street in Sherman Oaks.

McPerson met Haller as they were going through the metal detector at the courthouse on her first day of work for the D.A. She was going to orientation and he was going to a courtroom for a case. She and Haller divorced after eight years of marriage due to their careers being opposite each other: Haller was defending criminals, while McPherson was attempting to prosecute them. They share joint custody of their daughter and they remain friendly. In many ways they act as though they are still married. They argue regularly, mostly about their daughter and they have sex occasionally, but they are careful not to criticize each other in front of their daughter.

Her career at the D.A.'s office has not been stellar. It appears that this is primarily due to sexism or internal politics rather than any failing on her part. As a result she was stuck in the Van Nuys office rather than the more prestigious downtown headquarters. Despite her lack of advancement, she takes every case seriously and believes in her mission as a prosecutor.

In early March of 2005 the case of Louis Roulet was assigned to McPerson to prosecute. When Roulet selected Haller as his defense attorney it created a conflict of interest, forcing the D.A.'s office to assign the case to another prosecutor. In an unguarded moment in a bar on St. Patrick's Day, she told Haller about a possible prosecution witness named Corliss who might have damaging testimony against Roulet. After that she had no direct involvement in the case until the conclusion when she worked with the police to set a trap for Roulet.

When Haller was appointed as a special prosecutor to overturn the exoneration of Jason Jessup, a convicted child-murderer who was freed after DNA evidence cleared him of wrongdoing, Maggie was named along with Mickey's half-brother, Detective Harry Bosch, to the team to prosecute Jessup. D.A. Gabriel Williams promised that Mc Pherson would be promoted to downtown if Jessup was convicted. There was initially some friction between Maggie and Haller, but things settled down and they worked well together. She handled the preparation and testimony of Sarah Landy (Gleason) and did very well. However, since Jessup was killed rather than convicted, McPherson did not get the promotion. On the positive side, this case created an opportunity for Hayley Haller and Madeline Bosch to get to know each other.

On 12 October 2011, Maggie was assigned the prosecution of serial killer Chilton Hardy, Jr. By this time she had been transferred from Van Nuys to the Major Crimes unit, but it didn't last long. She backed her ex-husband for D.A. and he lost to Damon Kennedy. Making things even worse was the fact that one of Haller's clients killed two people while drunk driving. The new D.A. cleaned house and demoted or got rid of everyone who didn't support him. Maggie looked for a new job and found one in Ventura County, heading up the District Attorney's Digital Crime Unit. At some point she was transferred to the environmental protect unit.

In October 2019 when Haller was accused of murdering Sam Scales, McPherson came to Haller's defense. She initially provided morale support, but when Jennifer Aronson had to withdraw from the case McPherson stepped in and worked closely with Haller at the trial. She had to take a leave of absence from her job in order to do so.

A meeting was held on the morning of February 27 in the District Attorney's conference room. In attendance were McPherson, Haller, John Kelly, Judge Warfield, Dana Berg, Matthew Scallan, Wilson Corbett, Dawn Ruth, Rick Aiello, and a couple of others. The outcome of the meeting was agreement that all the charges against Haller would be dropped and he would be given full exoneration. In addition, Haller was able to extract a promise from the D.A. that Maggie would not be punished for having helped his defense.

Following this ordeal, McPherson and Haller renewed their relationship which had been strained for many years. Maggie and Hayley moved into Haller's house and lived as a family once more.

McPherson is played by Marisa Tomei in the 2011 film.

McPherson will be portrayed by Canadian actress Neve Campbell in the upcoming "The Lincoln Lawyer" series for Netflix. The upcoming 10 episode series will explore the character’s close personal relationship with Haller.