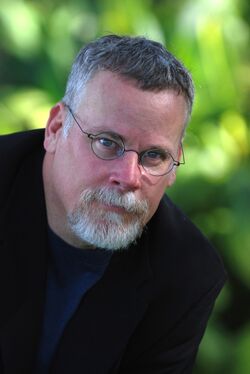 Michael Connelly (b. 21 July 1956, Philadelphia, Pennsylvania) is an author of detective novels, notably those featuring LAPD Detective Harry Bosch, named after the Dutch painter of fantasy and horror. The Black Echo, the first book featuring Bosch, won the Mystery Writers of America's Edgar Award for Best First Novel in 1992.

Connelly has written other books outside the Bosch series, though each has later been linked to the continuity of Bosch's world, as well as the series, about Bosch's half-brother, Los Angeles attorney Mickey Haller. Blood Work was made into a 2002 movie directed by and starring Clint Eastwood. In 2006, The Lincoln Lawyer was selected as one of ten books to feature in Richard & Judy's televised book club, and was adapted into a film starring Matthew McConaughey as Haller.

Connelly is a graduate of the University of Florida, where he earned a bachelor's degree in journalism in 1980. After graduation, he worked as a journalist in Daytona Beach, Florida and Fort Lauderdale, Florida. In 1986 he co-authored an article which was later short-listed for the Pulitzer Prize. Consequently, Connelly was offered a job as a crime reporter for the Los Angeles Times. Connelly has also written for television, co-creating the television series Level 9 for UPN with John Sacret Young and penning two episodes: "Mail Call" and "DefCon." In the Fall of 2013, Connelly co-scripted the pilot episode of Bosch along with Eric Overmyer. He later co-wrote the teleplays for four episodes of the first season – "`Tis the Season" and "Lost Light" (with Overmyer), "Fugazi" (with George Pelecanos), and "Us and Them" (with Terrill Lee Lankford) – and the final episode of the second season – "Everybody Counts" (with Lankford).

On 21 September 2009, Connelly appeared as himself in the second season premier of Castle, "Deep In Death." He later made a second appearance on 17 May 2010 in the second season finale, "A Deadly Game," and a third appearance on 11 April 2011 in the third season episode "The Dead Pool"; he later appeared on 11 May 2015 in the seventh season finale, "Hollander's Woods." Connelly has appeared alongside fellow authors James Patterson, Stephen J. Cannell, and Dennis Lehane as one of novelist Richard Castle's poker buddies.

On 6 February 2014, Connelly appeared in a wordless cameo role as an arrested Santa Claus in the pilot episode of the streaming Amazon series Bosch. He also participated in the first episode of the behind-the-scenes podcast series, "The Origins," along with Henrik Bastin, as well as "pod-crashing" the sixth and final episode of the series, "The Suspect," which featured Jason Gedrick.

Retrieved from "https://harrybosch.fandom.com/wiki/Michael_Connelly?oldid=12812"
Community content is available under CC-BY-SA unless otherwise noted.