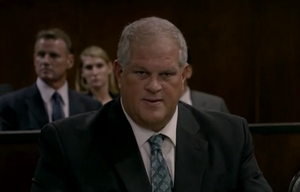 Rodney Belk is an assistant city attorney in Los Angeles. In 1993, he defended LAPD detective Harry Bosch in a wrongful death lawsuit brought by Deborah Church. At the time of that case, Belk was about 30 years old, relatively inexperienced, and outgunned by the plaintiff's attorney, Honey Chandler. He was also about 80 lbs. overweight with a florid face and a tendency to sweat profusely, earning him the nickname "Bulk." Bosch had little respect for Belk and often disagreed with his handling of the case. Belk tried to minimize Chandler's superior trial skills by suggesting to Bosch that she was sleeping with the judge. Bosch did not believe this was true, and he found it offensive. Belk called only one witness in the trial, Bosch himself. Belk performed better in closing arguments, particularly when Chandler made a misstep that got her rebuked by the judge.

Belk is played by guest star Abraham Benrubi in the streaming series Bosch. He is a recurring character in the first season. He defends Bosch in a similar wrongful death lawsuit filed by Rosa Flores following Bosch's shooting of her husband Roberto Flores; Flores is represented by Honey Chandler. Belk is comparably competent in the series.