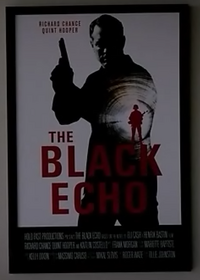 The Black Echo was a movie made by Paramount Pictures in 2002, starring Richard Chance and Quint Hooper, based "very loosely" on a case investigated by LAPD detective Harry Bosch.

Bosch was paid as a consultant on the film, but considered the movie to be "crap." His daughter later saw the movie while living in Hong Kong.

A movie based on one of Bosch's cases, for which he was paid as a consultant, has previously been mentioned as having been made in The Black Echo, The Black Ice, and A Darkness More Than Night.

The in-universe movie poster was later used as the cover for a mass-market paperback edition of the novel rereleased on 15 October 2013.

Retrieved from "https://harrybosch.fandom.com/wiki/The_Black_Echo_(film)?oldid=9078"
Community content is available under CC-BY-SA unless otherwise noted.