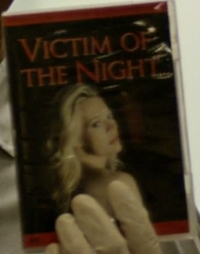 Victim of the Night was a R-rated film produced by Anthony Allen and TNA Productions, starring Veronica Allen, Ian Calip, and Kathleen Brennan, and directed by Larry Markoff.

A copy of the was kept in Allen's TNA office, where it was found in June of 2015 by LAPD detective Harry Bosch following Allen's murder.

The back of the DVD case reads:

Demure account Judy Marks (Randi Rondell)
struggling to cut-free a deadbeat boyfriend (Ian
Calip) and finds love with a private investigator
(Brad Warden), who she meets at a consult for a
case he's working on.

Encouraged by her close friend Grace (Kath-
leen Doise Brennan) she allows her ...
relationship to evolve into a ...

Retrieved from "https://harrybosch.fandom.com/wiki/Victim_of_the_Night_(film)?oldid=8762"
Community content is available under CC-BY-SA unless otherwise noted.